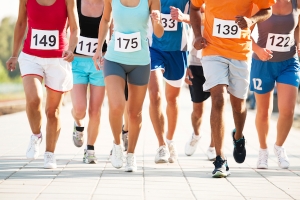 When I was younger I loved to run. Specifically, I loved to run fast! And so did my brothers. Actually, my oldest brother was pretty good at running fast. And of course, as the little sister, I wanted to run as fast or faster than him. So his best finish became my goal. One summer’s day on the tattered, busted up parking lot we would have our competitive races on, I boldly called out both my brothers for a race challenge that would take us further down the parking lot near a scary house that sat hidden. Without hesitation, they accepted my challenge. Our little sister gave us the go and my brothers and I were off! I gained momentum quickly and raced passed my younger brother for the first time EVER. I was excited! My adrenaline was pumping now. Inside I was screaming for my legs to move faster…and they did. I caught up with my oldest brother. I couldn’t believe it. We were just about neck and neck. Unbelievable! And then out of nowhere, I felt the wind of him passing me by. Just like that. He left me in literal dust. Oh my goodness, was I crushed. In true big brother fashion, after the race, he gloated for a little while, taunting me with jokes, but then showed me mercy with an admission. He said (paraphrasing), “I couldn’t believe you stayed with me as long as you did.” “Yes! Yes! Yes I did,” I readily replied with a big ‘ol smile. I promise you I was smiling just as big on the inside. His words assured me that even though I didn’t win that race, a race I called out and challenged, I was a worthy contender.

We are all in some kind of race today, a journey. For some, your life’s journey, thus far, has called out/challenged the enemy. Your persistence to walk the straight and narrow has upset miserable spirits. Your life’s anointing has awakened evil-doers. Your calling has sounded the alarm for an all out spiritual war against you to steal, kill and destroy you. Right now you feel defeated, like you’ve lost the race, like you’re not even a contender on the battlefield for God, helping to turn things around. Oh but to the contrary!  As scary as the forces against may be at first glance, there is something more powerful at work. That powerful work is you. Yes, you! God has been at the pottery wheel making, creating a magnificent you for His glory, to help turn things around, people around, for such a time as this! God will continue to protect, empower and provide for His powerful work along your journey. Don’t doubt it for a second. Stay steadfast to His will and His way. HIS choosing is no mistake. God is near, He is present. Believe that.

“Be strong. Take courage. Don’t be intimidated. Don’t give them a second thought because God, your God, is striding ahead of you. He’s right there with you. He won’t let you down; he won’t leave you.” – Deuteronomy 31:6 The Message Bible

You can do this!